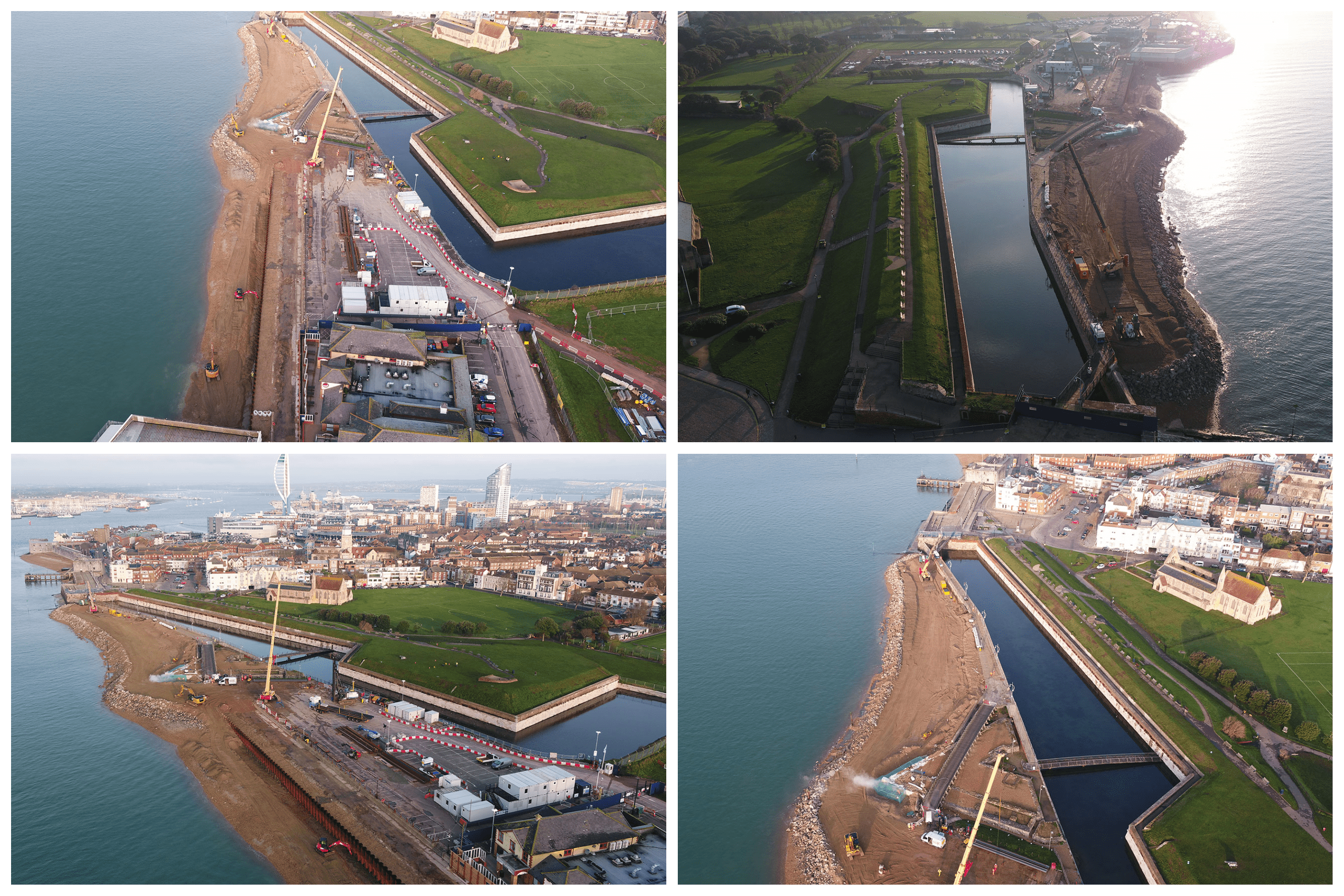 Long Curtain Moat is one the last surviving parts of Portsmouth's town fortifications and is therefore a very important part of Portsmouth's local heritage. It is unique in that it falls under two separate Scheduled Ancient Monuments (SAMs):  Long Curtain, King's Bastion and Spur Redoubt (List Entry Number: 1008754) and Point Battery including King Edward's Tower and Square Tower (List Entry Number: 1001870). This meant we were required to make applications for each SAM to Historic England, with variations issued as the scope of the works evolved.

Portsmouth was the only British town where moat defences were adopted. This monument is of outstanding interest as the only surviving extant length of the ramparts and moat which enclosed Portsmouth. Lord Nelson passed through the brick-lined sally port under Long Curtain Moat in 1805 on his last departure from England.

With the historic significance in mind, the Long Curtain Moat project involved crucial heritage and enabling work, undertaken from September 2019 in preparation for the start of the Southsea Coastal Scheme - the UK's largest local authority-led coastal defences project. Work included repairs to the inner moat walls as well as preparation work for the new sea defences.

The work began on the seaward side of the moat wall and Spur Redoubt to improve the condition of the heritage asset and ensure its stability prior to work commencing on the new sea defences. It consisted mostly of renewing the mortar joints between the stone where required and injecting carefully selected grout to the core of the wall where the new sea defences will tie into the existing historic structures.

These and other works were largely undertaken using floating pontoons for easy access that limited damage likelihood to the SAM. These included:

Where possible, all work was carried out using hand tools to ensure the necessary protection of the heritage asset. Historic England was consulted throughout the process, and the project team quickly formed a good working relationship resulting in timely approvals and turnaround times that have been maintained into the delivery of the main Southsea Coastal Scheme.

The project was procured and managed using the NEC3 Engineering and Construction Short Contract, and Southsea Coastal Scheme found the approach to contract management gave them a good base to work from to select a contractor.

The project has received very positive feedback from Portsmouth City Council, and the community has been supportive of the project and particularly the restoration and cleaning of the moat walls. In addition, other projects across Portsmouth are benefiting from their in-house heritage knowledge.

About the Conservation & Regeneration Award:

The conservation or rehabilitation of old or historic buildings and sites is often an important part of neighbourhood revitalisation, providing physical and psychological focus for the community and creating jobs and investment opportunities. Construction work that involves the conservation and regeneration of historic buildings requires great care and specialist skills and techniques.  More info.